Clay has been filming and fucking hot young men for over a decade, and in that time he has amassed quite a personal collection of private videos – everything from auditions to private hookups.  This is your chance to see the “straight” and not so straight guys in their first time on camera, or behind the scenes, or in small just-for-fun clips made especially for Clay’s spank bank.  Landon Matthews jerks off on his 18th birthday, way before he decided to go gay4pay.  Or take Tyler Nugent.  It took him two years before he let Clay fuck him, but this scene shows his first time on camera, ever.  Rafa is another straight bait hottie.  Clay filmed him with a chick when he was 18.  Now 20, Rafa has had two long years to think about what a private encounter with his favorite Daddy would be like.  He cums gallons while Clay is jerking and fingering his tight straight hole.  See Alex Woods, one of the most popular teens on Raunchy Bastards, loosening up his hole for the first time.  Also, in a very candid scene, watch Clay fuck and breed 18 year old Patrick Raposa’s boy pussy.  Patrick had done “real scenes” before this, but never got turned on so much as he did in a quickie with Daddy Clay.  Enjoy all of these private home-made videos with the hottest young guys! 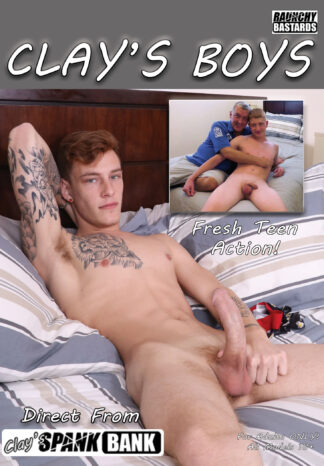