Slide That Cock Right In There Bro!

Most of these guys have dreamed of being pornstars since they were quite young, and once they are 19 or 21, they finally make the decision to give it a shot.  Their dreams of banging hot chicks is sometimes so strong that they believe they should “do anything” to get their foot in the door.  So, after they talk to me, I either fly them down from up North on a discount airline ticket, or they drive their beater from whatever trailer park in Florida they live in.  Once they are “on the ground,” so to speak, they are usually extremely uptight.  That’s when I know they either a) weren’t lying about being straight, or b) are just nervous about being on camera.  Usually it’s a combination.  After their first taste of dick and a paycheck, however, they always come back for more.  Hell, sometimes they even refer their friends.  Given the culture we live in, there is this huge hurdle going from a young straight man with zero gay experience to fucking the daylights out of a dude while being filmed.  The lucky few though, driven by a combination of horniness and greed, wind up on covers of DVDs like this one.  And I must say, I’ve curated some of the best scenes showcasing real straight guys coming to terms with the “hole is a hole” philosophy.  Sometimes (usually initially) I’ll pair up a straight guy with a gay guy or an experienced bi guy, but after a while, these hotties get so good at banging dudes’ asses that they can fuck each other.  It’s awesome to see the progression, but it’s even better to get off to the hot fucking that these guys are capable of.  And they can’t hide their enjoyment, either, because their cocks are rock hard and their loads are huge.  I knew they were gay! 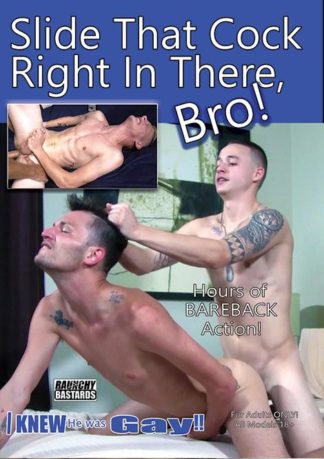 You're viewing: Slide That Cock Right In There Bro! $39.95
Add to cart